Our last couple of days on Koh Tao were spent travelling to various snorkelling spots. One of these was the neighbouring island of Koh Nang Yuan, just a 15 minute taxi boat ride from the main pier. Claimed by many to be the most beautiful of the Thai islands, Koh Nang Yuan is made up of two neighbouring islets connected by a thin strip of powdery white sand. Tiny, picturesque and seemingly perfect. 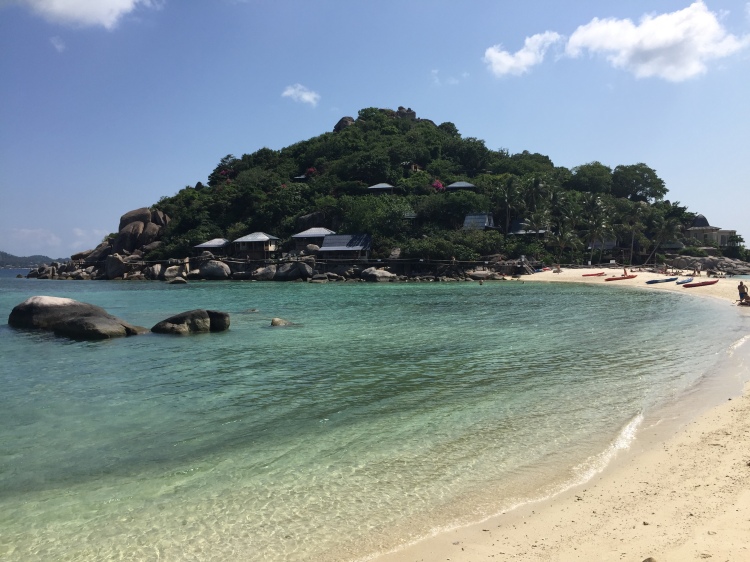 On arrival we were asked to pay an entrance fee of 100 baht per person and to dump all plastic bottles, under the pretence of protecting the island. Laying towels on the sand is also not allowed in order to try and preserve the sand. To begin with I thought that this was a great example of an island taking control of conserving its natural beauty, however by the end of the day my view had somewhat changed.

We crossed to the smaller islet first to climb to a view point, where you can see to the neighbouring land and beyond. This was absolutely stunning; even if as with all tourist sites we had to fight for a position on the summit.

Next we searched for somewhere to pitch up and enjoy the rest of the day in the sun. Deck chairs have been placed onto the beach as an alternative for towels, however these were all taken and we settled for some worn wooden loungers at the very back of the beach. Over the next three hours, a number of things happened which changed my mind about the whole  ‘protection’ thing. For one, the island was too busy; there were people everywhere and at times you felt like you could barely move. Secondly visitors ignored the ‘rules’ and there seemed to be no one around to enforce them. As well as this on closer inspection the sand was covered in litter and as we arrived when the island first opened, it seems that no one is picking it up. We started chatting to a tour guide while we were sunbathing, who told us that around 2000 people visited the island everyday. Because of this, the coral reef around the island is dying and he reckoned that within 4 years it would be completely gone. He explained that the owners of the resort on the island had stopped policing visitors and seemed to care more about the money they were receiving than the state of Koh Nang Yuan.

Unfortunately this did seem to ring true. We paid for entry, they banned plastic bottles so we had to buy drinks in glass for over inflated prices and there was also a charge for deck chairs. When we went swimming we were shocked to see that unlike the coast around Koh Tao the coral reef was in fact non-existent, which for such a beautiful island was such a huge shame. We sat there is this amazing paradise feeling guilty for even being there, for being part of its destruction. The truth is, what this island needs is a large reduction and cap on the number of visitors, regular trash clear ups and cordoned off swimming areas to limit any more damage to the coral and wildlife. I really hope that one day someone wakes up and saves this paradise from complete ruin.