Leaving the hotel at around 6pm, we came across a very quaint complimentary sweet trolley in the lobby; which I of course gleefully raided (sugar being my downfall). We then caught the tube to London Bridge, exiting the station directly at the base of the glittering shard.

We decided to go right to the top level of the skyscraper to enjoy a glass of champagne and the breathtaking views that come with it. The ‘View from the Shard’ is in two levels; an indoor and an outdoor viewpoint with a bar and limited seating on each. We spent an hour and a half taking in the sprawling city below us, reminiscing and drinking. It was a wonderful experience and a must for any London tourist! Next time I would love to visit the lower levels with the restaurants and bars for a more sophisticated evening!

We then strolled down along the waterfront, watching the sun slowly set along the horizon. It was such a beautiful evening that we both wanted to eat by the river and found a branch of the popular Cote chain right along the water. We ate a wonderful three courses and watched night fall over beautiful bank on the opposite side of the river; the gherkin, cheese grater and walkie talkie turning into glittering beacons behind us. 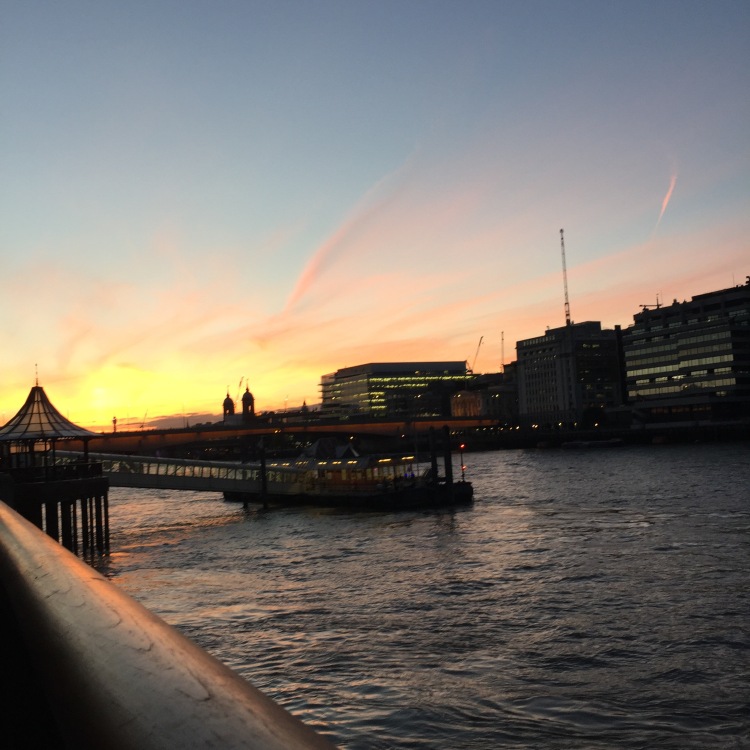 Very full and in great need of a walk, we carried on down the riverside until we got to Tower Bridge; which is even more grand at night as it is in day. It was a very romantic evening and at around 11pm we made our way leisurely back to our hotel room, where we collapsed into our amazingly soft queen sized bed to recharge for the next day.

The next morning we woke early and caught the tube to Waterloo. Having booked a midday spot at the London Dungeons, we stopped at Starbucks for a quick breakfast before heading down the South Bank towards the popular tourist attraction. We spent the next 2 hours on a walk-through tour of London’s history including the plague, great fire of London and even the reign of Henry VIII. Moving floors, a mirror maze, boat ride and free fall drop ride insued and it really did take me back to being a child; it was such fun! The only criticism I would have is that it didn’t contain much factual information about the events and while I hate to admit it (it sounds so adult and boring), I would have loved to hear a bit more about the events that have shaped London into what it is today.

We exited back onto Southbank at around 2pm and as the hottest day of the year so far, we were quickly glad we’d spent two hours in an airconditioned building. We gained relief halfway down Southbank in a Wagamama where we ate lunch in the shade and then headed to Hyde Park to enjoy the sunshine. Initially walking along the most populated area of the recreation ground, we found a bench in the sun next to the lake and watched as people frolicked and struggled in rowing boats and pedalows. Having hired one ourselves in the past we declined this time around however I would urge anyone who hasn’t to try one out – it is so fun! We then wandered down the waterfront and under a bridge, eventually coming out in Kensington Gardens; a beautiful slice of tranquility in the bustling capital.
It was such a beautiful end to our anniversary trip and I was on cloud nine as I boarded the train home later that afternoon. Does anyone else love London as much as I do? I would love to hear about any other activities I could do on my next visit!